I’ve made macarons a few times, but always using French meringue. The results have mostly been good, with the problems mainly being me (pulling them out of the oven too early, not resting them before baking enough). The macarons were smooth, with-feet and crisp on the outside and soft on the inside. I had never made Italian meringue macarons and I am very pleased with the results. Some of the things I’ve read say that French meringue macarons are less reliable and more sensitive to things like humidity and overmixing. Italian meringue macarons on the other hand, are more  difficult to overmix and are generally used in professional kitchens as less can go wrong.

Although macarons are not my favourite thing to eat, of all those that I’ve tried, this rose, raspberry and lychee one is really good, the Ispahan by Pierre Hermé. This blog beautifully illustrates how to make and assemble it.

2. Make your macaron shells as per the recipe. You can add raspberry flavour if you wish. Colour them a light pink when the meringue has cooled down; a little goes long way.

3. Assemble the macarons, as per the Travelling Foodie’s blog, with a lychee in the middle (sadly canned), fresh raspberries around, and a rose petal and raspberry on top.

4. Decorate with a rose petal and raspberry.

– Make your macarons in advance as they freeze (unfilled) extremely well.

– You can make the mousseline filling in advance as well, it keeps in the fridge for a few days

– When making the Italian meringue – for macarons – pour the sugar syrup into the egg whites when they are at soft peak. You will get lumps and bumps in the macaron if you wait until stiff peaks.

Country of origin: France, with some Italian ancestry?

What comes to mind when you think of macarons? A Ladurée rainbow of pastel colours, Pierre Hermé’s magical lychee, rose and raspberry creation and elegantly dressed ladies nibbling on them delicately in between sips of tea but to tell the truth I think that they may be slightly over-rated. With coffee, a piece of cake is perfect, with tea, bring on the scones and for dessert I don’t automatically think macaron. However, they are still very fun to make and sometimes nothing but their chewy, nutty sweetness will do. The fruitier flavors like lemon or raspberry allow you to cut through the sweetness with more tart fillings like curd or jam (although these Salted Caramel macarons are delicious).

The recipe I used was from Macarons which has all sorts of interesting flavor combinations and is very easy to follow. In the basic recipe:

3 Add any color or flavors

4 Pipe out and let them sit until not sticky to the touch, and then bake

Another method (e.g. Ketchup macarons from Pierre Hermé) uses egg whites in step 1 above and step 2 is Italian meringue, made by adding hot sugar syrup to the whipped egg whites. To be attempted soon.

I find judging when the macarons are ready to take out of the oven the most difficult part of the process. It depends on your oven of course, but I think mine works best starting at 162°C/325°F as per the recipe, and then lowering it as soon as the macarons go in, to 150°C/300°F, cooking them for about 12 minutes. To check their done-ness, I open the oven towards the end and push the shell part to see if it slides around too easily, which indicates that they need another minute or two. I’m sure I’m doing some damage  to the little chaps by opening the oven and checking like this, but I’m not sure how else to tell.

I used white chocolate ganache with fresh raspberries and raspberry jam with berries as fillings. I “tested” them straight after sandwiching and then again after 24 hours in the fridge – the latter definitely tasted better. 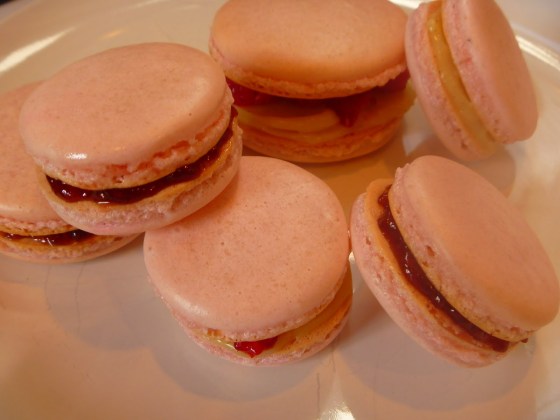 My top tips for macarons:

– Take your time, don’t make these if you are in a hurry! It’s Ground Almond’s Law that they will go wrong.

– Draw circles on the underside of your baking paper, it makes piping them out much easier.

– Allow them to dry properly before they bake – mine took an hour and a half before they developed their “skin”.