This delicious almondy King Cake is made to celebrate the Epiphany, and the Three Kings around January 6th every year.  Never having grown up with this tradition,  I think it’s a lovely post-Christmas luxury: puff pastry, almonds, pastry cream… The galette is traditionally circular and is a disc of puff pastry, filled with almond cream or frangipane (almond cream with pastry cream), sealed with another disc, egg-washed and then decorated by scoring with a knife.  A very useful blog post about making your own is Chocolate and Zucchini’s post on making your own Galette des Rois.

Attempt one was rather a disaster, as I was in rush – never a good idea when baking – and number two the ready-made puff pasty I bought had torn, so I made the silly decision to fold it over itself and roll it out again (I should have just kept rolling and patched up the rip I think). As a result, the pastry didn’t rise as much as it should have and it tore during baking. It still tasted good though, if a little rich – I had filled it with almond cream alone.

I thought I’d have another go on a lazy Sunday morning, and whilst I still haven’t managed to muster the courage to make my own puff pastry, I tried the galette again, with mixed results. I used this recipe, but diluted the almond filling with one batch of pastry cream from this book. The pastry still cracked in the oven, but the taste of the filling was much better. The frangipane filling was divine(!). By the second slice, I had to add  a handful of berries to cut through all that sweetness, which made me think of making a Galette des Rois with a fruit puree layer…for next year. 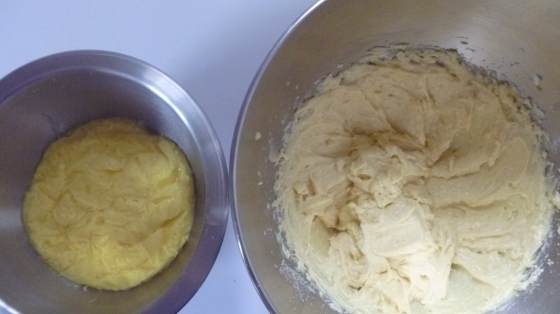 Anyway, to be tried again, when my arteries have recovered from all the butter. I will get it round and it will not crack!

-Once you’ve rolled your puff pastry out to the required thickness, let it rest for at least 15 minutes, covered, in the fridge, to avoid it shrinking in the oven

– Watch that egg wash, make sure it’s evenly spread and not pooling in places, as they may burn and stop even rising of the pastry

-Practice your design on a piece of paper, to ensure a steady hand