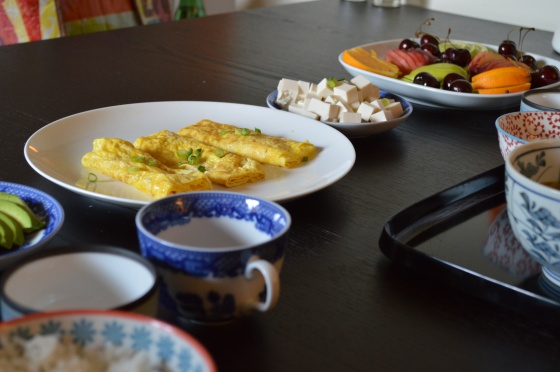 Is anybody else bored of weekday breakfasts? I am. It’s always the same thing, porridge/oatmeal, cereal, eggs and toast and then back to the beginning. I don’t see why I should have to wait until the weekend to have an exciting start to the day.

Granted, this breakfast takes a little time to prepare, but the night before I measured out the rice, cut the tofu and spring onions.

In the morning, you just need to make the rice,  an omelette or boiled egg, grill some fish if you fancy it and make some miso soup and green tea. It was a satisfying, delicious breakfast that keep me going happily until lunch time. 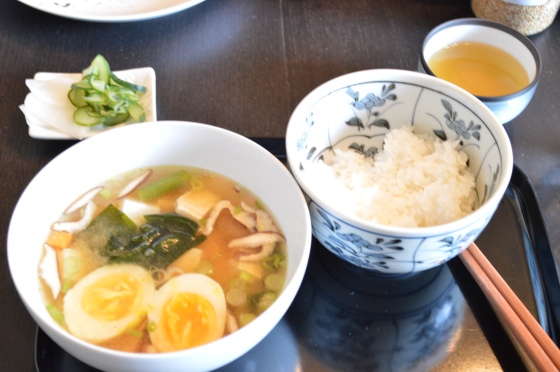 I’ve been meaning to make a slow-cooked stew since last winter, so I’m biting the bullet and going for it now, despite the sweltering weather. As an ex-vegetarian, I’m still nervous about cooking meat and this is the first time I cooked lamb in my life. I’ve never been to Marrakesh, but I hope I’d been eating something fragrant and spiced like wonderfully comforting dish, with a plate of fluffy cous cous.

I adapted this Anthony-Worrall Thompson BBC recipe, which calls for lots of ingredients, most of which will be in your cupboards. The lamb is marinated overnight in a blend of dry spices which include paprika, turmeric and cinnamon, and the time really does make all the difference to the taste. The next day, you brown the meat in a pan, being careful not to overcrowd and bring the temperature down too much. .As with most stews, the next step is to sweat some onions, add garlic, toss in the meat and then you add most of the other ingredients. Dried fruit and pomegranate molasses add a delicious tangi-ness and flaked almonds give the tagine a lovely crunch. Once it’s come to a boil, you can put in a low oven for about 3 hours.

I served the tagine with cous cous, and a random addition of cauliflower steaks and cauliflower puree.

– If you’re using lamb shoulder, you can cook the tagine in a low oven for 2-3 hours which makes the meat so soft it’s almost melts into the sauce. If you’re using a more tender cut, like leg of lamb, reduce the overall cooking time.

– Don’t cook your instant cous cous until right before you are ready to serve!